Punjab Kings and Kolkata Knight Riders are locking horns against each other in the 21st match of the ongoing edition of the Indian Premier League. KKR skipper Eoin Morgan won the toss and elected to bowl first. And his bowlers justified his decision by keeping tight line and lengths. The PKBS openers found the going tough and couldn’t give their team a good start.

KL Rahul played a slow innings before getting out to Pat Cummins in the final over of the powerplay. He made 19 runs in 20 balls. However, his partner Mayank Agarwal opted to dig deep and play the anchor’s role. But his innings got cut short due to Rahul Tripathi’s brilliant catch.

After losing wickets in a cluster, Agarwal decided to go steadily. But he fell in the trap set by Sunil Narine, who gave him a short ball and set the field accordingly. Agarwal tried to clear the ropes and the ball reached as far as Rahul Tripathi, who took a fine catch while fumbling forward to dismiss the opener.

Agarwal played 34 balls for his 31 runs, where he hit one four and two sixes.

PKBS couldn’t revive their innings from there on and lost wickets at regular intervals. It was Chris Jordan’s late blows that took their total to 123/9 in 20 overs. Jordan scored 30 runs off just 18 balls, which includes three mighty sixes and one four.

KKR bowlers bowled with their tail up and kept things tight for PKBS batsmen. Shivam Mavi conceded just 13 runs in his four overs and managed to dismiss Chris Gayle for a golden duck. Prasidh Krishna took three wickets at the cost of 30 runs in four overs and didn’t allow PKBS to make a comeback in the game. 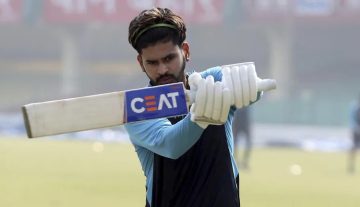