It all happened on the fifth delivery of the 15th over when Wade’s attempt to up increase the impetus saw him skying a delivery from Heat all-rounder Ben Cutting. With the ball going towards Renshaw at long-on, he grabbed the ball but had to toss the ball in the air to maintain his balance while running back into the boundary.

In an attempt to make sure that he prevented a six, Renshaw jumped in the air whilst inside the boundary and tapped the ball towards Banton who had run to his right from deep mid-wicket. While Banton completed the catch, it was only after numerous replays that Wade was declared out by the third umpire. It is worth mentioning that such a catch would have been deemed as not-out in the past for a fielder’s last point of contact had to be inside the playing area.

Here is the video of Renshaw and Banton’s unthinkable catch:

This is genuinely blowing our mind. After all that, Matthew Wade is GONE!

It was a recent change in the rule which worked well for Renshaw and allowed him to tap the ball from outside the playing area.

After Wade won the toss and chose to bat, the visiting team only managed to reach a meager score of 126/9 in 20 overs on the back of their captain’s 14th T20 half-century. Playing his first match of the tournament, Wade scored 61 (46) with the help of three fours and two sixes. With bowling figures of 4-0-21-3, Brisbane pacer Josh Lalor was the pick of their bowlers.

That was rightly given OUT, as per this recent rule change#BBL09 pic.twitter.com/Pg4f00GuoS

CAN YOU JUST BELIEVE THIS CATCH? 😲

The ball went over the ropes, but Matt Renshaw, somehow, manages to pull it back for Tom Banton 🙌

Both the fielder and the ball were over the ropes when the act was initiated. Should this rule be changed❓👀#BBL09pic.twitter.com/U5TKhKMyov

There's a lot of Somerset County Cricket Club in this clip! 👊

Yep that’s what the rule always was, and it’s obviously the correct way. 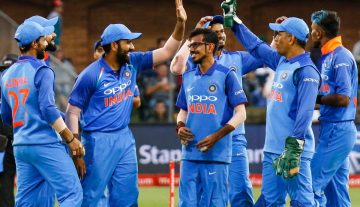