Currently, the Kolkata Knight Riders (KKR) are facing the Mumbai Indians (MI) at the iconic Eden Gardens in Delhi in the 47th match of the ongoing season of the Indian Premier League (IPL). After winning the toss, the MI skipper, Rohit Sharm asked the hosts to bat first and his decision cost him a lot as the Kolkata lost no wicket in the powerplay.

During the toss, the KKR skipper, Dinesh Karthik revealed that they have made as many as three changes in the squad as Prithvi Raj, Carlos Brathwaite, Prasidh Krishna made way for Robin Uthappa, Sandeep Warrier, and Harry Gurney. On the other hand, MI made just one change as Anukul Roy has been replaced by Barinder Sran.

The KKR openers, Shubman Gill and Chris Lynn started all guns blazing for the hosts as they amassed as many as 96 runs for the opening wicket under the first 10 overs itself, before the latter getting dismissed by Rahul Chahar after scoring a fifty. Surprisingly, Andre Russell started building a partnership with Gill and they added as many as 62 runs for the second wicket before the latter getting out to Hardik Pandya in the 16th over.

Even after Gill’s dismissal, Russell and Karthik kept on smashing the MI bowlers and they amassed as many as 74 runs in less than 30 balls which helped KKR to reach the total of 232/2 in their quota of 20 overs.

During the chase, MI lost Quinton de Kock in the second over of Sunil Narine followed by Rohit Sharma, who got dismissed by Harry Gurney in the 4th over. Even Evin Lewis failed to make an impact as he was dismissed by Russell in the 7th over. Kierron Pollard and Surya Kumar Yadav tried to make a partnership but the latter was dismissed by Russel again in the 9th over after getting smashed for a six on the previous ball.

Here are the videos of the six and the wicket: 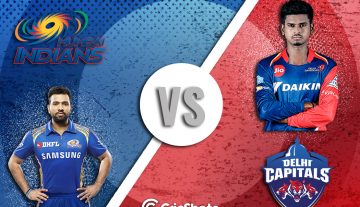