India’s young pacer, Navdeep Saini played a crucial role in the men in blue registering another dominating win over Sri Lanka in the second T20I of the three-match series in Indore on Tuesday. Saini picked up a couple of wickets and conceded just 18 runs in his quota of four overs. After the match, Yuzvendra Chahal, who was not included in the playing XI, interviewed Shardul Thakur and Saini on his infamous show, Chahal TV.

During the conversation, Chahal complimented Saini for bowling accurate yorkers while taking a cheeky dig at the young fast-bowler. “Since Jasprit Bumrah is the yorker king, so are you yorker queen?” Chahal jokingly asked Saini that left everyone in splits.

MUST WATCH: @imShard and Navdeep Saini make their debut on CHAHAL TV 📺📺

In the match, Virat Kohli won the toss and decided to bowl first. The bowlers struck in unison as India managed to restrict Sri Lanka to a below-par total of 142 for nine in their allotted 20 overs. While Saini picked up a couple of wickets, Shardul Thakur bagged three in the 19th over.

During the chase, the Indian openers, KL Rahul and Shikhar Dhawan came out all guns blazing as they added as many as 71 runs for the opening wicket. However, Rahul was dismissed by Wanindu Hasranga in the 10th over and Dhawan was dismissed by the same bowler in his next over.

After Dhawan’s dismissal, Kohli along with Shreyas Iyer added 51 runs in just 35 balls, but the latter got out in the 18th ver with just 6 runs required. However, the Indian skipper finished the things off in style by smashing Lahiru Kumara for a six over the fine-leg boundary. India chased won the total with 7 wickets in hand and 15 balls to spare.

The first match was called off due to damp patches on the pitch. Pune will host the third and final T20I on Friday. 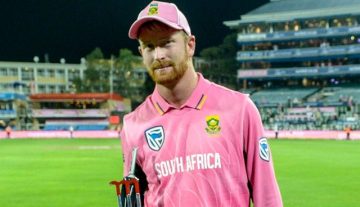