India whitewashed the Blackcaps 5-0 with Jasprit Bumrah playing a key role in the final encounter as the visitors defended the 164-run target. They became the first team to register a whitewash in the 5-match T20I series. There were many outstanding performances in the series, but the fielding effort of Sanju Saom in Mount Manganui was outstanding.

However, in terms of fielding the men in blue has tremendous room for improvement. Otherwise, a terrific fielding unit, India were not at their best in this series, however, there has been some mind-boggling effort by the Indian players and one of them was Sanju Samson’s incredible effort on the boundary in the fifth and final T20I at the Bay Oval in Mount Maunganui.

Despite failing with bat in both the games he had played, while fielding at deep mid-wicket on Sunday, he showed his incredible acrobatic skills to stop the ball from going for a certain six. Ross Taylor had smashed the ball on Shardul Thakur’s bowling towards the mid-wicket boundary but Samson went airborne, parallel to the ground, took the catch and flicked it back into the field of play — all this in mid-air. With the New Zealander running two runs, Samson helped the Indian team to save four runs.

Here is how social media appreciated the brilliant effort of Sanju Samson:

Eagle catch🔥😱👏👏 Everyone is so busy in celebrating the series win that they forgot the brilliant effort of sanju samson in today's match. What ah effect 😱😱 Wowww Sanju 👏👏👏👏Something to take away from this series for Sanju Samson Has been a gun fielder in this series 🔥 #NZvsIND #INDvsNZt20 #SanjuSamson #TeamIndia

Indian pace attack led by Bumrah bowled like a unit that helped the men in blue to register an unprecedented series whitewash with a seven-run victory against New Zealand. With the series already in the bag after they won the first four matches of the five-match series, Virat Kohli took the rest and handed the captaincy reins to Rohit Sharma. India, electing to bat, rode on Rohit’s fifty to post 163/3 in 20 overs.

Rohit had to retire hurt on 60 off 41 deliveries (3×4, 3×6) after he suffered from cramps. He did not come out to the field as KL Rahul led the team in the second innings. Chasing 164 for victory, New Zealand could manage 156/9 in 20 overs despite hitting Shivam Dube for 34 runs in one over.

ALSO READ: R Ashwin Got In A Banter With James Anderson Over ‘Mankading’

The Indian pace trio of Bumrah, Navdeep Saini (2/23) and Shardul Thakur (2/38) managed to restrict the hosts and finally took India over the line. Now, the men in blue will be playing a three-match ODI series against the Kiwi with the first game scheduled to be played at the Seddon Park in Hamilton on Wednesday. 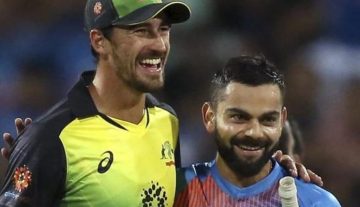