Veteran Pakistan wicketkeeper-batter Sarfaraz Ahmed played an exceptional knock where he nearly pulled off a famous win single-handedly for Pakistan while chasing a stiff target of 319 runs against New Zealand on Day 5 of the second and final Test match at the National Bank Arena in Karachi. His century brought Pakistan closer to the target. However, it was his wife’s reaction from the stands that made headlines after her husband had scored the century during the crucial phase of the Test match and with this, he finished a long wait of eight years to finally reach three figures in the longest format as well.

While the New Zealand bowlers looked for breakthroughs but Sarfaraz Ahmed stood strong with his counter-attacking strategy as he single-handedly helped Pakistan in the fourth innings. He scored his century off only 135 deliveries and more importantly, this hundred came in his home ground which made the occasion even more special for him as well.

However, after working a delivery bowled by New Zealand pacer Matt Henry to the off-side, Sarfaraz Ahmed ran two and celebrated his fourth Test century as well as he also got a standing ovation from his teammates and the spectators also. Meanwhile, the cameras zoomed at his better half Syeda Khusbaht who was seen dancing in happiness after her husband had finally reached the three-figure mark in a high-pressure match. She also cried happily thereafter. Sarfaraz Ahmed scored 118 runs off 176 deliveries and was dismissed during the last half an hour of the final day’s play as well. 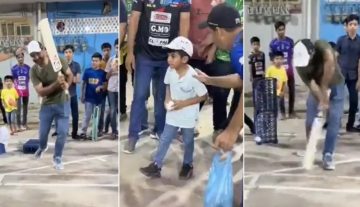 Videos
By CricShots - Jun 21, 2022
Sarfaraz Ahmed Was Clean Bowled By His 5-year-old Son