Currently, Royal Challengers Bangalore (RCB) are locking horns with Delhi Capitals (DC) at the M Chinnaswamy Stadium in Bangalore, where the hosts are still searching for their maiden win. After winning the toss, the DC skipper, Shreyas Iyer asked the hosts to bat first. However, the RCB openers, Virat Kohli and Parthiv Patel failed to get going as the latter got dismissed in the second over itself.

RCB’s poor run continued in the game as well, as they lost the crucial wicket of AB de Villiers in the final over the powerplay as they which left them reeling at 40/2 after the first six overs. After ABD’s dismissal, Stoinis also got out early in the 11th over, but then came Moen Ali made a crucial partnership of 37 runs for the 4th wicket with Kohli before getting dismissed by Sandeep Lamichhane.

WATCH – Kagiso Rabada Gets Three Wickets In An Over

After his dismissal, Virat took the onus on him to take RCB to a decent total as he smashed 19 runs in the 17th over, before getting out to Kagiso Rabada on the very first ball of the 18th over and Rabada managed to take two more wickets in that over. As a result of that brilliant over from Rabada, RCB only managed to reach the total of 149/6 in their quota of 20 overs.

During the chase, Delhi faced a huge blow in the first over itself as Shikhar Dhawan got dismissed on the third ball of the 2nd innings owing to a brilliant catch by Navdeep Saini. In the next over of Southee, Prithvi Shaw took the revenge by smashing the bowler for four consecutive fours.

The carnage started with Shaw smashing the bowler towards mid-wicket and as result of that, Southee bowled short of length on leg stump and again the batsman was ready to smash it over the fine leg boundary. The next two balls were the copy of each other as Southee bowled marginally short and Shaw stayed on the back foot to cut it past point.

Here is the video of the carnage from Shaw: 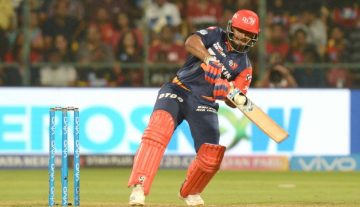