After India’s thumping win over Bangladesh in the second T20I of the three-match series, opener Shikhar Dhawan celebrated the triumph in his own inimitable fashion. Known for his aggressive style of batting as an opener, Dhawan packs a punch as an actor as well. A glimpse of it was available for fans on Friday when Dhawan came up with his own unique way to spend some fun time with his teammates.

After the win in Rajkot, the southpaw opener found a hilarious way to celebrate the occasion. He along with fast bowler Khaleel Ahmed and spinner Yuzvendra Chahal shot a video in which the opener can be seen emulating Akshay Kumar’s character Bala from the recently-released movie Housefull 4.

Captioning the video on Instagram, Dhawan wrote, “Bala ke side effects 😂 @akshaykumar @khaleelahmed13 @yuzi_chahal23”. Here is the video of the same:

In the short video shared by Dhawan on his official Instagram handle, Chahal can be seen giving a background sound while the former re-enacts Akshay’s act. Khaleel can be seen asking the questions to support the act. Dhawan also tagged Khaleel, Chahal and Akshay’s official handles. In the movie, Akshay’s character Bala has a tendency to forget everything after being exposed to any sort of loud noise.

Earlier, Dhawan has thanked fans for cheering the team after defeating Bangladesh in the second T20I. Stand-in skipper Rohit Sharma played a knock of 85 runs off 43 balls while Dhawan scored 31 runs. The duo shared a brilliant 118-run opening stand which put the hosts in the driver’s seat during the 154-run chase. He had tweeted: “All happy faces after a good game. Thank you for all the support. Kudos to @ImRo45 for his great knock”. 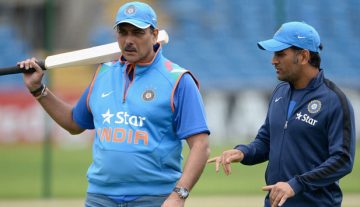 News
By CricShots - Nov 26, 2019
Ravi Shastri Not Waiting For Retirement Of MS Dhoni