The Indian Test specialist, Cheteshwar Pujara produced a moment of magic on the field with the ball in hand on the final over of Saurashtra’s Ranji Trophy match against Uttar Pradesh on Friday as he got his maiden first-class wicket with his second delivery at the stroke of stumps on Day 2.

Pujara picked up the final wicket of Mohit Jangra with his leg-spin bowling and was overjoyed with his achievement. He got Jangra caught at first slip and then took off for a short sprint in celebration, punching the air in delight before his teammates gathered around him.

Pujara even posted a short clip of the wicket on his Instagram account. The caption of the post read: “The day when I changed my Batsman status to an All-rounder.”

Meanwhile, UP are still in a strong position in the match after taking a first-innings lead of 192 runs against Saurashtra. The Group B match in Rajkot saw Saurashtra posting 331 with Pujara and Sheldon Jackson top-scoring for the team with 57 runs each while opener Harvik Desai made 54.

Saurabh Kumar (4 for 85) and Zeeshan Ansari (3 for 125) did most of the damage for UP by sharing 7 wickets between themselves while Shivam Mavi bagged a couple.

UP in reply rode on Mohammad Saif’s 165 and useful contributions from Akshdeep Nath (95), Rinku Singh (71) and Aryan Juyal (52) to post a fighting total of 523 before they were bowled out with Pujara picking up the final wicket of the day.

Kamlesh Makvana grabbed three wickets for the home side while Jaydev Unadkat, Dharmendrasinh Jadeja and Parth Bhut took a couple. Pujara got the lone wicket which was his sixth from 197 first-class matches. 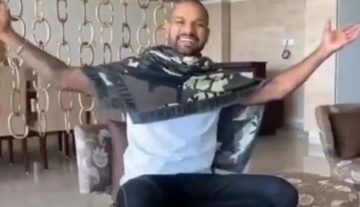