Currently, the Rajasthan Royals (RR) and Sunrisers Hyderabad (SRH) are locking horns with each other at the Sawai Mansingh Stadium in Jaipur. After winning the toss, the RR skipper, Steve Smith decided to bowl first and asked the visitors to bat. However, his decision backfired as SRH scored 51 runs in the powerplay itself.

One of the few bad things for SRH in the game was the early dismissal of their skipper Williamson when he was undone by Shreya Gopal’s wrong’un in the 4th over. However, after his dismissal, David Warner and Manish Pandey continued their batting form as they added as many as 75 runs for the second wicket before the former getting out in the 13th over of Oshane Thomas owing to a mind-boggling catch by Steve Smith.

On the first ball of the over, Warner made some room for himself on a length ball on the middle stump and tried to hit the ball over extra cover, but failed to time it well and the ball swirled high off the top edge over mid-off. Smith completed a brilliant catch as he ran back and attempted a full-length dive to his right to hold on to the ball. 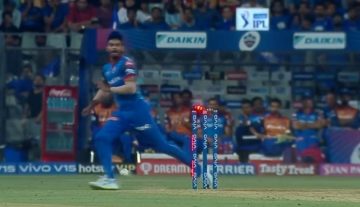