Zimbabwean opener Solomon Mire was forced to go off the field as he received a massive blow from the Windies pacer Kemar Roach, who bowled a lethal bouncer on the batsman’s eye on Monday. Mire faced Roach’s bouncer during the ICC World Cup qualifiers against West Indies.

The bouncer ended up being lodged in Solomon Mire’s helmet grill. Here’s how it happened:

Soloman Mire underwent concussion tests soon and has been cleared.  He recovered in time to bat again and added 23 runs to his score before being bowled out by Jason Holder. Soloman made scored 45 off 33 balls and was the second highest scorer for Zimbabwe who was bowled out for 289 in 50 overs with Brendon Taylor top scoring with 138.

Mire’s departure brought Craig Ervine to the crease, and he added 49 runs with Taylor to revive the Zimbabwe innings, but it was after Ervine was bowled by Roach in the 20th over that Taylor took the responsibility upon himself to increase the momentum and change the course of the game.

In a statement released Zimbabwe Cricket said, ”@kingsoly21 retired hurt on 22 runs after 6.2 overs following injury from a ball that ended up lodged in his helmet grill. He’s being treated for swelling and blurred vision and will sit out until the swelling subsides and his vision clears enough for him to bat.”

Mire batted on till the 49th over with the Zimbabwe tail and took the total past 280 before he was bowled by JasonHolder for 45. The Windies skipper returned figures of 4/35 while Roach picked up 3/55 and Paul had 2/55 as Zimbabwe were bowled out off the last ball of their 50 overs.

Mire made his ODI debut against Bangladesh in November 2014 and has represented his country in 36 ODI matches since then. He has hit one ODI hundred and three fifties in his career so far. 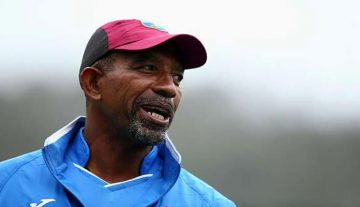