India got off to dominating start in the finale at the Wankhede Stadium in Mumbai, owing to the openers, KL Rahul and Rohit Sharma smashing the windies for the word go. While Sharma started by smashing Sheldon Cottrell, Rahul too joined the party with some lustrous blows from the other end.

Left-armer Khary Pierre was not spared as Sharma found his groove and struck the ball sweetly, scoring meaty boundaries. It looked like there was almost nothing that the Windies players could do at that point in time to stop Sharma’s big shots.

And having struck Pierre for a humongous six in the very first ball of the fifth over, Rohit was looking to make most of the over. On the second ball of the over, the Mumbaikar once again laid back and smoked Pierre into the stands, almost, only for it to be stopped by the literal giant effort from Evin Lewis.

As the ball came off Sharma’s bat the commentators and all the audience thought it was heading for another maximum, Lewis jumped high enough to catch the ball, and flick it back into play as momentum got him across the advertisement hoardings. Immediately after going past the hoardings, the southpaw came running back into the field to throw the ball straight over the keeper’s hand to catch Sharma gasping for breath, almost catching him short of the crease.

Rohit was caught ball-watching as he was struggling to get the second run, resulting in a near run-out and an opportunity to stop the run leaking for the Windies side. A certain moment of glory almost turned into a calamity for both Rohit – one that was made possible by Lewis’ athleticism and presence of mind.

That was something special from Evin Lewis. Wow!!

Some fantastic fielding effort by #EvinLewis#INDvWI

Wow, Evin Lewis! One thing T20 cricket has given to the game is these brilliant efforts on the boundary line by the fielders. This format needs fitter and athletic players. #INDvWI

No! No way! You can not do that Evin Lewis.

No! No way! You can not do that Evin Lewis. 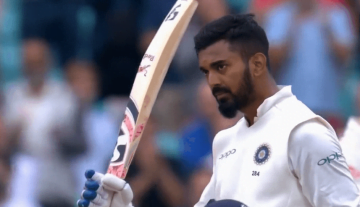