The light factor was always going to play a huge part when it comes to Day-Night Test matches. Despite India’s tremendous grip over the pink ball throughout the first session of the ongoing Test, the light did cause a little bit of trouble when the Indian opener, Rohit Sharma attempted an impulsive catch without even figuring where the ball was.

Fortunately for India, the chaos created by the lack of light and pink-ball combination didn’t hurt the Indian team at all. What it did cause was an eventful and cherishing moment for India as they had sealed the tenth Bangladeshi wicket and bundled out the visitors packing for a meager total of 106.

As Bangladesh’s No.11 Abu Jayed was facing Mohammad Shami’s signature short delivery pitching outside off, he tried to cut it past point but instead, he ended up chopping it to the second slip. Bangladesh’s fate seemed shining for a few microseconds when Rohit did let go of the ball as he clearly wasn’t sure about the placement of the pink cherry.

Luckily, it was Cheteshwar Pujara to the rescue as he grabbed the catch, which bounced off Rohit’s hands, at second slip. The instinctive catch by Pujarawas his 50th catch in Tests. The highlight of the incident was that Rohit was clearly blinded by the lack of light as he was seen hunting for the ball with his eyes even as his other teammates were already started celebrating he looked clueless about the ball.

The Indian bowlers wreaked havoc as they bundled out for a meager total of 106 runs. Ishant Sharma was the pick of the bowlers as he scalped 5 wickets (his 10th 5-wicket haul in Test and 2nd at home), while Umesh Yadav taking three and Mohammed Shami also taking a couple.

Rohit Sharma has treated the viewers to a superb catch and an even better GIF moment, the latter coming seconds after Pujara completed the catch.#PinkBallTestMatch

Spotting #PinkBall at twilight is too difficult it seems

🇧🇩 have been bundled out for 106.#OneFamily #CricketMeriJaan #INDvBAN #PinkBallTest

Hahahaha even after Pujara caught the ball, Rohit had no idea where the ball went. #INDvBAN #INDvsBAN #pinktest #pinkballtestmatch

India finish off Bangladesh with a comedy catching routine between Rohit and Pujara just to add to the pink ball fun for the crowd. Rohit probably now thinking of getting 106 himself before the close… #INDvBAN 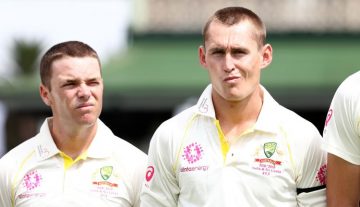 News
By Sandy - Jan 3, 2019
Labuschagne Confident That They Can Get Early Breakthroughs On Day Two Of Sydney Test