Attributing his recent success to a slight change in his bowling grip, the Indian fast bowler, Umesh Yadav said the modification gave him more control and improved his consistency to ball outswingers. Yadav finished with a match haul of 8/81 after the Kolkata Test against Bangladesh, which included a five-wicket haul in the second innings, to set up India’s innings and 46-run win in their first ever day-night Test against Bangladesh on Sunday.

In a conversation with the Indian opener, Rohit Sharma on Bcci.tv, Umesh said, “Tweaking my bowling grip helped immensely”.

Talking about his bowling further, Umesh said, “My grip was different earlier so one or two balls will swing while couple of them would either get deflected from the legs or run down the leg side for boundaries as byes, so it was difficult to control in this grip. So I spoke to my coaches and also while discussing within ourselves, I felt when I hold the ball properly, I have more control and chances of moving the ball. So my outswinger became consistent and I could also throw in a few inswingers after making that change.”

Ishant Sharma, who had claimed five wickets in Bangladesh’s first innings and four in the second, said changing his wrist position helped him create angles which made life difficult for the batsmen to read him, especially the left-handers.

Ishant then asked Rohit about the one-handed catch he pulled off to send Mominul Hague back to the pavilion in the first innings.

Replying to Ishant, Rohit said: “When the batsman got the edge, I saw that the ball is coming between me and Virat and it might pass from the gap. I saw in the replay that he came for the catch but in the second slip, if you think that you should go for the catch then you should go and should not go half-heartedly. I went and luckily I got the catch.” 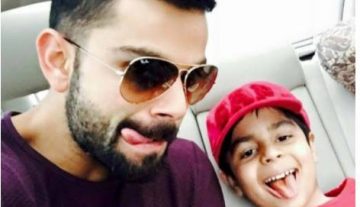 Uncategorized
By CricShots - Jul 24, 2017
Unseen pictures of Virat Kohli and his beautiful family