Team India is chasing a modest total of 163 against Pakistan in the Group A match of the ongoing Asia Cup in Dubai. Earlier, Pakistan skipper Sarfraz Ahmed won the toss and opted to bat against India. The Indian skipper Rohit Sharma decided to make two changes in the playing XI as they brought back Jasprit Bumrah and Hardik Pandya in place of Shardul Thakur and Khaleel Ahmed. While Pakistan picked the same team which played against Hong Kong.

However, Sarfraz’s decision to bat first backfired as they suffered a collapse that saw Pakistan go from 96/3 to 121/7 all taken by Kedar Jadhav. They only managed to reach the total of 162 before being bundled out in the 44th over. Among the Indian bowlers, Bhuvneshwar Kumar (3/15) and Kedar Jadhav (3/23) bagged three wickets each while Jasprit Bumrah (2/23) got two wickets and Kuldeep Yadav (1/37) picked up one wicket.

Coming into the chase, the Indian openers Rohit and Shikhar Dhawan started a bit slow as they were 27/0 after the 7-over mark. However, the momentum witnessed a drastic change in the 8th over bowled by Usman Khan as he conceded 19 runs in that over.

The fourth ball of the over was a bouncer by Khan, but Rohit spotted that early. He swilled and pulled forcefully and despite it being a top edge, the ball went over the keeper’s head for massive six. The next ball was again a short ball but not a bouncer and this time Sharma raised his front leg and paddled a pull shot behind the square towards the fine-leg boundary. However, it was a no-ball from Usman.

Facing the free-hit, Rohit made sure that he will make the bowler pay for his mistakes as he smashed a six into the second tier over the cow corner boundary. The angle from around the wicket by Khan helped the Indian skipper to play the pull shot as the bowler again bowled a short ball outside off, and he thumped a pull right into the cow-corner boundary.

Here is the video of Rohit Sharma’s brilliance:

Rohit at it's very best…!! pic.twitter.com/AUJeDEU0hF 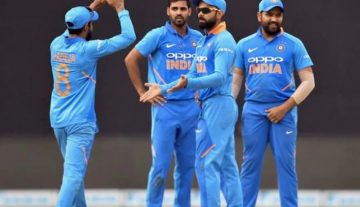