Currently, the Delhi Capitals (DC) are facing the Royal Challengers Bangalore (RCB) at the Feroz Shah Kotla Stadium in Delhi in the 46th match of the ongoing season of the Indian Premier League (IPL). After winning the toss, the DC skipper, Shreyas Iyer decided to bat first.

During the toss, the RCB skipper, Virat Kohli revealed that they have made as many as three changes in the squad as Moeen Ali, Tim Southee, and Akshdeep Nath made way for Henrich Klaasen, Shivam Dube, and Gurkeerat Singh. On the other hand, DC made just one change as Sandeep Lamichhane came back in as a replacement of Chris Morris.

Kohli’s love affair with the coin tosses is not so good even in international cricket and the luck hasn’t been on his side in the IPL. In this game, the toss was important for both the team to make an early statement and it was no surprise that the RCB skipper lost it as he called it wrong when the coin was flipped in the air. After winning the toss, Iyer was hoping that the ball will turn as the pitch is drier and it was better to put the runs on the board.

Meanwhile, soon after he lost the toss, Virat gestured something funny to the dugout. He gestured saying that he has lost his ninth toss in 12 matches and was rather happy. There could be a reason for it as RCB have lost their last three matches despite losing the toss which is why the RCB skipper enjoyed the moment. Having said that, they will be expected to gove more than 100% to get past the strong DC outfit.

Delhi have got off to a decent start with Shikhar Dhawan looking really good and it remains to be seen if RCB will be able to restrict them to a below-par score. 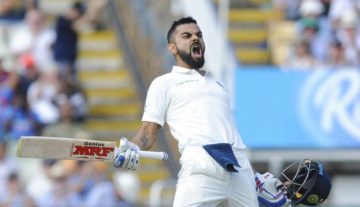