If you ask the world, who is the best batsman in the world currently, nine out of ten will have an answer that starts with V and ends with I. Yes, it is Virat Kohli. The champion batsman has rocked the stage wherever he has batted. He is already a legend in ODI cricket, record-breaker in Tests and a run-machine in T20s. It is scary even to imagine what eventual records will he break.

Armored with all these batting skills, there is one more factor that sets Virat Kohli apart from all the other cricketers. It’s his fitness. The master in waiting has six pack abs and fitness level that of world-class athletes. He competes with Usain Bolt when it comes to being fit.

The fitness aspect of Kohli has been discussed many times and is an example worth following in real life. He has now set out another demonstration of supreme powers. In a recent promotion for Puma, Virat has timed his running between the wickets and thrown a challenge to his teammates to beat his timings.

Starting with the tagline “Unlock #NewLevels” Virat is seen padded up at the Chinnaswamy stadium, Bangalore. With stopwatch on the count, he starts running and manages to complete three runs as fast as he can. The Instagram post has the caption, “Think you can run faster than me? Here’s my fastest time for 3 runs. Pad up and send a video of your fastest 3 runs mentioning #NewLevels and @PUMAIndia. @mandeeps12 let’s see if you can beat 8.90 sec mundeya! 😏”

Think you can run faster than me? 🤔 Here’s my fastest time for 3 runs. Pad up and send a video of your fastest 3 runs mentioning #NewLevels and @PUMAIndia. @mandeeps12 let’s see if you can beat 8.90 sec mundeya! 😏

Virat has challenged his RCB teammate Mandeep Singh to beat his timing. Mandeep has sporting accepted the challenge thrown by his captain and responded with a tweet.

I'm up for the challenge. Be ready for a tough fight paaji @imVkohli #NewLevels @PUMACricket https://t.co/bfAqHImgHE

Whether Mandeep will be able to defeat Kohli’s timing or not is undecided but we will definitely be seeing RCB complete their runs faster than anyone. 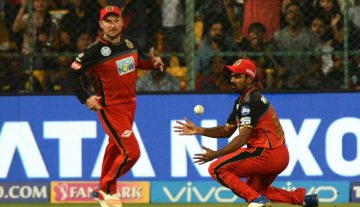