The Indian skipper, Virat Kohli took a stunning catch during dismiss the Australian protege, Marnus Labuschagne as the men in blue continued their exceptional day on the field. India and Australia are currently locking horns with each other in teh series decider of the three-match ODI series at the M Chinnaswamy Stadium in Bangalore. The Australian skipper, Aaron Finch won the toss, and unlike the first two games decided to bat after failing to chase 341 in the previous encounter.

Labuschnagne was dismissed on the third delivery of the 32nd over when he attempted to play an aerial drive off India all-rounder Ravindra Jadeja saw him walking back to the pavilion. Kohli, who was fielding at cover, dived to his right to complete the catch in a first-rate attempt.

Realizing the importance of breaking a huge partnership of 127 runs between Steve Smith and Labuschagne, the Indian skipper and other players were seen gleefully celebrating the dismissal. Coming in to bat at No. 4 in the ninth over, Labuschagne ended up scoring 54 (64) with the help of five fours. Playing his third ODI, the 25-year old right-hand batsman registered his maiden ODI half-century today.

Coming on the back of a 96-run partnership in the second ODI in Rajkot, the visiting duo once again put a stellar batting performance.

Labuschagne was surprisingly replaced by Australia fast bowler Mitchell Starc who was sent in as a pinch-hitter. The ploy didn’t work well for the Aussies as the southpaw was dismissed by Jadeja in the same over. An economical spell saw Jadeja registering bowling figures of 10-1-44-2.

Here is how Twitterati reacted to Kohli’s catch:

JADEJA masterclass. Where are you haters 💉💉 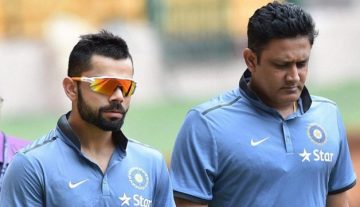