On Tuesday, the veteran Indian cricketer, Ambati Rayudu took a slight dig at the Indian selectors through a cryptic tweet almost 24 hours after his World Cup exclusion. Since Asia Cup 2018, he was touted to be India’s No.4 in the ODI batting lineup. But was eventually dropped by BCCI’s five-member selection panel on Monday for the World Cup 2019 squad.

Rayudu lost the race to Vijay Shankar who was praised by the chairman of selectors MSK Prasad as a three-dimensional player. He tweeted, “Just Ordered a new set of 3d glasses to watch the world cup ..”

Just Ordered a new set of 3d glasses to watch the world cup 😉😋..

Rayudu had made his way into the Indian team after his consistent performances in the IPL 2018. He continued his form in the Asia Cup 2018 and was phenomenal in the West Indies series at home where he had scored a century as well. Even, the skipper Virat Kohli acknowledged that Rayudu “is the right” choice for the No.4 spot.

However, midway through the New Zealand series earlier this year, the Indian skipper had mentioned that India is still looking to solidify the No.4 slot. On the other hand, deputy skipper Rohit Sharma felt that MS Dhoni is the best person to solve the long-standing conundrum. An array of three more poor performances in the home series in Australia and Rayudu was eventually dropped from the playing XI for the first time since October 2018. The step raised further doubts over his position in India’s World Cup squad.

In the meantime, Shankar came out all guns blazing with a few impressive cameos with the bat. He showed that he has the ability to bat under pressure and that he can be used as a floater as well in the middle-order, even one of his best knocks came with Rayudu itself.

While announcing the World Cup squad, Prasad said, “After the Champions Trophy [2017], we tried quite a few people in that position. Tried quite a few middle-order batsmen, which also included Karthik, [Shreyas] Iyer and Manish Pandey. We did give a few more chances to Rayudu but Shankar gives three dimensions. He can bat, if conditions are overcast he can bowl, plus he is a fielder. We are looking at Shankar as a No 4 [option].” 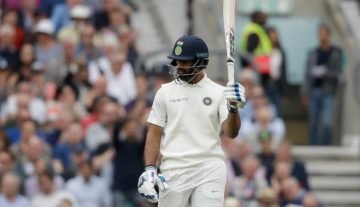 News
By CricShots - Feb 14, 2020
Hanuma Vihari Willing To Play At Any Batting Position