The young English fast bowler, Jofra Archer has played just three ODIs for England so far and in those games, he has bowled just 22 overs and still managed to find a place in the World Cup squad. However, he was selected because of his control over his bowling as it convinced the English selectors to pick him in the final 15 for the mega event. On Tuesday, England announced the squad and included the Caribbean born pacer in the team at the expense of David Willey.

After hearing his selection news, Archer was over the moon as he has also been expected to make an impact for the hosts in the World Cup. He has now been looking to bag huge scalps in the tournament and wants to get better of the Indian skipper and the world’s best batsman Virat Kohli. Despite playing in the IPL for a couple of seasons, Archer got to bowl just two deliveries at Kohli in which he has conceded a run and a leg-bye in 2018 and 2019 respectively.

ALSO READ: Virat Kohli Terms It As The Most Challenging Tournament

Talking about the same, Archer said, “I’d quite like to get Virat Kohli out because I wasn’t able to do it in the IPL!”

England will be entering the tournament as hot favorites to win their first 50-over World Cup ever this year and Jofra Archer feels lucky to be part of the set-up. Recalling the moment when he got a maiden call from the selector Ed Smith, he said, “I was driving at the time and I felt the phone vibrate. I answered without looking and he introduced himself. It was really, really exciting to be part of a big summer for English cricket.”

Archer further added, “Everyone has welcomed me with open arms since the day that I got in. It is a great team to be a part of, probably one of the better teams I have been involved in.” 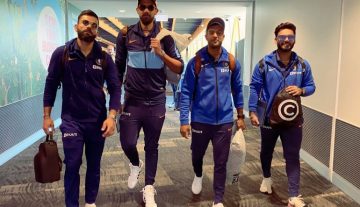