While announcing their final squad for the ICC World Cup 2019, Pakistan has made three changes to their squad as Mohammad Amir, Wahab Riaz and Asif Ali came back in, to replace Junaid Khan, Faheem Ashraf and Abid Ali from the provisional squad.

Amir and Asif were a part of the Pakistan squad during their recently concluded ODI series in England. Amir played one match before being sidelined with chicken pox, but now he has been completely recovered. Asif grabbed his opportunity, scoring two half-centuries in four innings to seal his spot.

The surprise inclusion is Wahab as he hasn’t any ODI match since the group stage match against India in the Champions Trophy 2017. He last played for Pakistan in a Test against Australia in October last year. On the other hand, even Amir has been failing to perform consistently since the Champions Trophy final against India in 2017. From that game, he has played 15 matches picking up only five wickets at an average of 92.6.

Justifying the changes, the Pakistan chief selector Inzamam-ul-Haq said the nature of wickets in England and the performance of their pacers in the ODI series forced Pakistan to choose the experience of Wahab and Amir. In the ODI series, England scored 373/3, 359/4 (in 44.5 overs), 341/7 (in 49.3 overs) and 351/9 in the four completed games.

Inzamam said, “Junaid and Faheem had been originally preferred over a few other bowlers based on their recent performances and the investment we had made on them since 2017. After it became obvious that the bat is likely to dominate the ball in the World Cup, we revisited our strategy and reverted to the pace of Mohammad Amir and Wahab Riaz. Furthermore, Amir and Wahab give the fast bowling attack more experience to back and support the relatively inexperienced but immensely talent Shaheen Shah Afridi and Mohammad Hasnain.” 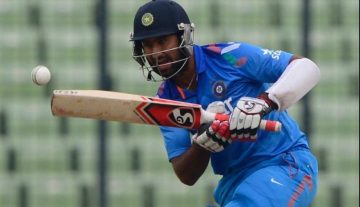 News
By CricShots - May 17, 2019
Pujara Concerned About The English Conditions Suiting Team India