“After a long couple days of travel from Barbados, the #MenInMaroon have arrived in India,” the official handle of Windies Cricket tweeted.

The #MenInMaroon have a quick turnaround, as WI get ready to play @BCCI in 3 ODI’s here, starting on February 6 #INDvsWI 🏏🌴 pic.twitter.com/WSHvHKoqVA

The Gujarat Cricket Association (GCA) on Tuesday confirmed that the upcoming three-match ODI series between India and West Indies will be played without the presence of the crowd.

Tweeting about the same, GCA wrote, “Considering the current situation, all the matches will be played behind closed doors. We are all set to host the West Indies Tour of India ODI Series 2022. The 1st ODI on the 6th of Feb will be a very special and historic match as India will be playing its 1000th ODI. The Indian team will be the first cricket team in the world to achieve this feat.”

Considering the current situation, all the matches will be played behind the closed doors.

As per the original schedule, West Indies were slated to play three ODIs in Ahmedabad, Jaipur, and Kolkata and three T20Is in Cuttack, Visakhapatnam, and Thiruvananthapuram.

However, due to a surge in Covid-19 cases across the country in the last month, the BCCI decided to hold the white-ball series in just two venues – Ahmedabad and Kolkata. West Indies have recalled Kemar Roach, Nkrumah Bonner, and Brandon King into the ODI squad for the India series. 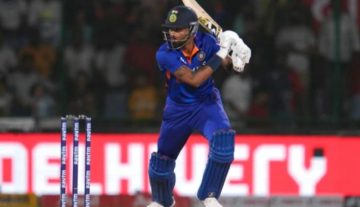