Twitter Reaction
When Muttiah Muralitharan Almost Got All The 10 Wickets In Innings
By CricShots - Dec 5, 2021 11:45 am
Views 6.9K

The New Zealand spinner, Ajaz Patel become the talk of the town after his phenomenal bowling figures against India in the first innings of the second test match. However, Muttiah Muralitharan was also at a similar point once in 2002 against Zimbabwe. However, Patel went on to bowl beautifully against India recently.

Ajaz Patel went on to remove one batsman after the other in the first innings of the second test match. Moreover, even the red soil of the Wankhede pitch went on to help the Mumbai-born New Zealand spinner. He went on to put up a quality effort when the bowl was not doing much through the pitch.

Patel became the third bowler in the history of Test cricket to pick all the 10 wickets.  However, Sri Lanka’s legendary spinner Muttiah Muralitharan was also at a similar crossroads. It was during the 2002 Kandy test match when the Sri Lankan spinner was close to picking up 10 wickets in just one inning.

Muttiah Muralitharan was brilliant throughout the game as well as the test series. Moreover, Zimbabwe being the opposition also went on to help the Sri Lankan spinner as they were merely a weak opposition with not much skill set and potential.

It was a glaring visual when Muralitharan went out to pick up the ninth wicket. Everyone in the stadium was eagerly waiting for the feat thinking they would witness history in front of their eyes. But the spell got over and Chaminda Vas was brought into the attack.

ALSO READ: Mayank Agarwal Reveals They Are Looking To Score As Many Runs As Possible

Here is how the fans reacted to it:

Serious doubt. Can't umpire give the batsman out for a caught behind, if none appealed?

What if the batsmen nicked it to first slip and none appealed?

It was @KumarSanga2 who appealed. Could see that Murali was annoyed.

Should have come around the wicket.
Over the wicket was anyways too risky 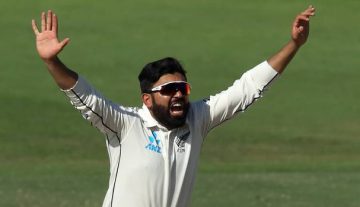