India wicketkeeper Wriddhiman Saha reveals how he does not worry about his spot in the Indian team. He reveals how the team comes first in the life philosophy he lives by.

Saha had an excellent outing as a wicketkeeper during India’s homes test matches against South Africa and Bangladesh. However, Rishabh Pant was given the nod as India’s first-choice wicket-keeper for the New Zealand tour.

“I have never stressed on stuff like what happened and why I am not playing. Look, if the team management decides something, there is no place for contrarian views as far as I am concerned,” Saha said.

Saha reveals how he never feel gets any negative emotions after being dropped from the team. He says  “I am like this from my childhood. I don’t get overly emotional. I am the same when I scored a lot of runs and when I have failed or when I have not been picked in the playing XI.”

Since his debut in 2010, Saha has featured in 37 Tests for India. He has donned the Indian jersey nine times ODIs as well. He shares how the management thinks for the benefit of the team. Saha goes on to the reason why there shouldn’t be a place for a contrarian view.

“It’s not what I like or dislike. Team management would do whatever is necessary for the benefit of the team. It’s their prerogative. I have been taught from childhood that team comes first and I see no reason to change my philosophy. My job is to train and be ready,” Saha said.

Saha recalls how he and Rishab Pant trained together during India’s disastrous tour to NZ. The Virat Kohli led Indian team was humiliated in tests matches as Kiwis won the test series 2-0.

“I wouldn’t say I have shared anything specific with Rishabh but we would train together along with our fielding coach R Sridhar. The interactions would be like I would tell him what are the situations that I have faced in my cricketing career, know about what he has faced,” he recalled.

“Also what Sridhar sir has observed from the sidelines or during training, we would discuss that. How to improve one’s keeping in various conditions, match simulations, game situations, these were the topics of conversation,” he added. 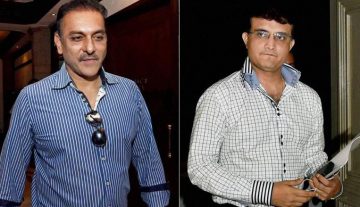 Twitter Reaction
By CricShots - Oct 14, 2019
Shastri Gets Trolled As Ganguly On Verge Of Becoming BCCI President