Rahul Johri, Chief Executive of BCCI, has made it clear that players have to pass the Yo-Yo test for getting into the Indian team. After coming back from injury, players need to pass this test. Johri stated that even for the Test team, players have to qualify this test.

While talking to Indian Express, he said “The captain, coach and chief selector, along with the other members of the selection committee in consultation with the support staff (trainer and physio), have set the parameters. The fitness parameters set by the team management for athletes to be eligible for selection are non-negotiable.”

He clearly said that all current squad members have cleared this Yo-Yo test, which is commonly known as a cardio drill for international athletes. Before the Test series against Sri Lanka in November, players have to visit National Cricket Academy in Bengaluru to prove their fitness level.

Basically, this test reveals the lung power of the players. They have to start with a modest jog to heavy sprints. Johri believes that it will raise the fitness bar in Indian cricket. “On the yo-yo scale, the grade needed to be achieved is 16.1, which is the minimum standard set for an elite international sportsman. The players have been informed of such parameters and most current players have already achieved this standard. In case of any exceptions, we’ve given them sufficient time to raise their fitness levels,” he said.

This should not be the only criteria for the selection in the team, skills should matter as well, believes a former Indian coaching staff. “The yo-yo test can’t be the only criterion to test a cricketer’s fitness. It’s a skill-based sport. There’s so much mental stamina that’s required too,” he said, adding that many of the past legends would have failed the test.

One former Indian cricketer said one U-19 world cup star missed out on the T20I squad against Australia because of Yo-Yo test. He said “He’s played literally three non-stop months of cricket, starting with the local TNCA league, then the TNPL and then the Deodhar Trophy and India ‘A’ matches. Then, within a day-and-a-half, if he’s made to undergo a yo-yo test, obviously he can’t be expected to be the most prepared. Plus, players need to be told about the tests. There are those who run too fast at the start and eventually struggle once the time between the beeps starts reducing. You can’t just do it once and say ‘Ok, you’ve failed and you can’t be picked.”

Indications are pointing towards dashing batsman Rishabh Pant, who is currently busy with India A team against New Zealand A. Other than him, Yuvraj Singh and Suresh Raina were axed from the squad after not passing the test.

Meanwhile, Ashish Nehra’s inclusion in the team means he has gone through this drill successfully. A senior trainer of domestic cricket said “Ashish Nehra has been recuperating from injury and his body was perfectly rested and prepared for the test. So, it’s no surprise that he did well. He’s also someone who is very disciplined with his preparation routines. And, he is a fast bowler from the old school mindset, who runs a lot as part of his exercise rather than spend too many hours in the gym. His aerobic levels have always been high.” 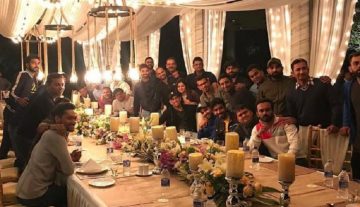