Yusuf Pathan has been an integral part of Kolkata Knight Riders for years and has made them win matches. This year he was robbed in by Sunrisers Hyderabad. The camp was suffering from the huge blow as they missed on their star player and skipper Warner who is banned for ball tampering issue. But the coach Tom Moody and Newly appointed captain Kane Williamson have bought in positives since last game.

The last year finalists started off the season on a good note as they defeated Rajasthan Royals considerably in the first game. It was no less than a one-sided game where opener Shikhar Dhawan single-handedly scored 77 runs. Williamson too did his part well. Yusuf Pathan had no chance to show off his punch hitting capabilities n the first game but we are aware what he is capable up to.

Pathan has voiced his eagerness to do well for his new franchise and also make a comeback in Indian Team.It is almost six years that he has ever worn the Indian jersey.

“I’m gelling really well with the team and I’m getting to learn a lot from head coach Tom Moody and Muttiah Muralitharan. I am excited for the new season as I will get to play for a new team. It is not at all difficult for me to adjust to the new setup. When you play a sport professionally, you have to make these adjustments. I am looking forward to putting my step forward and give it my best. SRH has a good legacy and I hope I can contribute to team’s success this season.” Said Yusuf Pathan to Cricnext.

Yusuf holds the record of second fastest fifty in IPL and has the capability of making huge shots. This year Hyderabad is making experiments on with their old and new players. They have also Shakib al Hassan in their squad along with Manish Pandey who are also ex-Knight Rider Players. Sunrisers will take on Mumbai tonight and next Kolkata Knight Riders on Sunday. 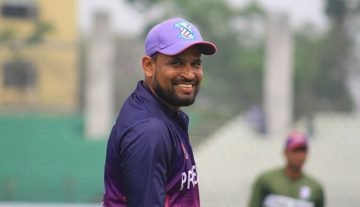