On Monday, the Indian Premier League (IPL) franchise Royal Challengers Bangalore (RCB) registered a thumping win against the Kings XI Punjab (KXIP) when the two teams met in Indore. The visitors defeated the hosts by a huge margin of 10 wickets and with around 12 over to spare. The huge margin of victory had earned them a big boost in their net run rate and keep their hopes of qualifying for playoffs after the end of the league phase alive.

The Kings XI batting lineup suffered an unexpected batting collapse as they crumbled for a meager score of 88, which was easily chased down by RCB’s opening duo of Virat Kohli (48*) and Parthiv Patel (40*). A key talking point ahead of the game was the return of Chris Gayle, who is playing for KXIP in IPL 2018 after having played a number of successful seasons with RCB in the past.

After the match, Gayle was caught on camera shaking hands with and hugging Kohli, which showed that the bromance with his former captain was still there. Another example of it was on display on Instagram, this time with leg-spinner Yuzvendra Chahal, as the two exchanged a cute banter on a picture posted by Chahal. Here is Chahal’s post:

The picture sees them sharing a light moment with Chahal asking his followers to suggest a caption. The self-proclaimed ‘Universe Boss’ replied to the post, “He miss me,” suggesting that the youngster still misses being in the same team as Gayle. Chahal then replied, “Yes I’m”, which shows the two are still great friends.

After yesterday’s result, KXIP is now standing at the fifth place on the points table while RCB is at the seventh place. 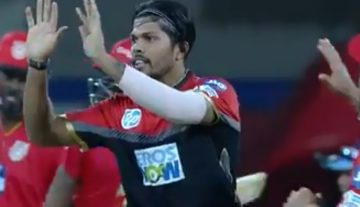