After India’s practice session in Vishakhapatnam for the first T20I against Australia, the young leggie shared a picture on Twitter with Rohit Sharma and Krunal Pandya sharing a light moment with the leg-spinner. Chahal captioned the post as “My reaction when they tell me you’re batting at number 3 tomorrow..”. The story behind the caption might be something to do with Chahal’s batting in New Zealand and his interview with Rohit Sharma on bcci.tv.

Yuzvendra Chahal was India’s highest run-scorer in the fourth ODI in New Zealand as he remained unbeaten on 18. In one of the interviews he does on Chahal TV, he asked Rohit Sharma who was the stand-in skipper at that time for a promotion in the batting order.

My reaction when they tell me you're batting at number 3 tomorrow.. 😂🤣

Rohit and Chahal share a really good relationship both on and off the field. Both of them are seen commentating on each other’s pictures on social media and trying to pull each other’s legs. Rohit has tried trolling the leggie on multiple occasions in the recent past and the leggie hasn’t stayed too far behind as well. He has tried to reply in the same humor.

The veteran Indian opener posted the same picture that Chahal posted on Saturday but he had a different caption to it. He had a special name in store for Chahal. Rohit termed the leggie as the GOAT of Instagram. Rohit’s caption on Instagram read, “When the #GoatOfInstagram makes a joke it’s mandatory for us commoners to laugh.”

When the #GoatOfInstagram makes a joke it’s mandatory for us commoners to laugh. 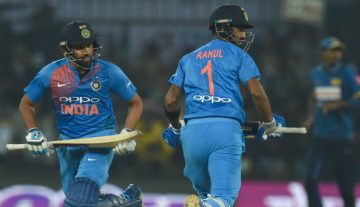 Features
By Sandy - Jul 6, 2018
Who should open for India – Rohit Sharma or KL Rahul