The Indian leg-spinner, Yuzvendra Chahal is currently in the United Arab Emirates (UAE) as he will be taking part in the IPL 2020, posted an adorable picture with his fiancee Dhanashree Verma on Instagram. The Royal Challengers Bangalore (RCB) leggie made the announcement of his engagement with choreographer Dhanashree Verma earlier this month on Instagram by sharing photos from their engagement ceremony.

It’s not easy for any professional athlete to leave their family members and these were even harder for Chahal as he captioned the post as: “You’ve stolen a pizza of my heart”.

His fiancee was also quick to reply to the post as she commented: “I agree”, along with a couple of emojis — a pizza slice emoji and a red heart emoji.

With less than a month left for the start of IPL 2020, as many as six franchises have already reached the UAE, where the tournament is scheduled to commence on September 19.

RCB had shared a photo of their contingent aboard a flight to the UAE. Despite the mask, Chahal was easily recognizable in that picture as he was sitting in one of the front seats. One big name that was missing from that picture was RCB skipper Virat Kohli. However, by the evening he also announced his arrival in Dubai through a social media post that he captioned: “Hello Dubai!”

RCB’s overseas stars like AB de Villiers, Dale Steyn, and Chris Morris have also joined the teammates in the UAE on Saturday. As per BCCI’s protocols, all these players will be undergoing a quarantine period of seven days and will have to return three negative COVID-19 tests before they can start their training.

With the change in venue and conditions, Kohli and his men will be hoping in a change in their fortunes and get their hands on the IPL trophy for the first time, and in order to achieve that, Yuzvendra Chahal will be expected to play a crucial role. 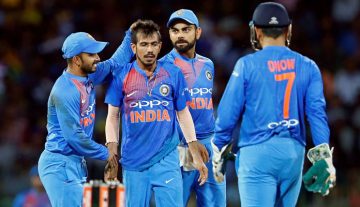