By winning the third T20 against Sri Lanka in Dharamsala by 6 wickets, India registered its 12th consecutive win in the shortest format of the game. Shreyas Iyer played another stormy knock as he scored the third consecutive unbeaten fifty as he amassed 73 runs off 45 balls with the help of 9 fours and 1 six. Shreyas was awarded the Player of the Match title. After the final T20I, the Indian leg-spinner, Yuzvendra Chahal interviewed Iyer and asked questions about his best innings.

Replying to the question Shreyas Iyer said ahead of the series, he had thought that he would try to win India by staying not out. During the chat with Yuzvendra Chahal, the Indian leggie took a dig at Mohammad Siraj, for the latter’s hairstyle.

During the chat, Yuzvendra Chahal ha jokingly said that looking at Siraj’s hairstyle, it appears like ‘water has not been given in the grass, the grass has dried up/ and it ended up all the three players start laughing and laughing. BCCI has also shared the video of eth same as well. Chahal also asked Siraj that you go to the haircut salon before every match. The Indian bowler reacted and said that there is nothing like this, just like this he gets his hair cut.

Here is the video of the came.

From mantra of success to a guest apperance! 😎😎

Talking about the match, Sri Lanka batted first and only managed to reach a below-par score of 146 runs for 5 wickets. After which India managed to score with more than three overs to spare after the loss of 4 wickets. Shreyas Iyer became the ‘Man of the Match’ and ‘Man of the Series’ as he scored his third consecutive unbeaten half-century. He had amassed as many as 204 runs in three matches and was not dismissed even once. Ravindra Jadeja remained unbeaten on 22 as India posted 148 for four.

Shreyas Iyer also made a special record by scoring 3 consecutive unbeaten half-centuries in the same series. Iyer has become the highest run-scorer for India in the three-match T20I series. By doing this, he has broken the record of Virat Kohli. Kohli had amassed 199 runs in the 3 T20 match series against Australia in 2016. 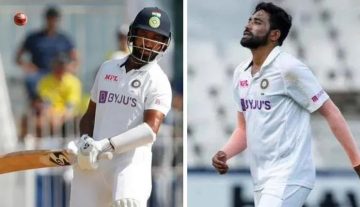