Former Indian fast bowler, Zaheer Khan celebrated his 41st birthday on Tuesday and he came with a funny reply to the birthday wish by the Indian all-rounder, Hardik Pandya. The latter’s tweeted was received as “disrespectful” by many Twitter use as he took the jibe as the veteran cricketer pacer.

On Monday, Hardik tweeted birthday wishes to Zaheer, posting a video in which he can be seen hitting the pacer “out of the park”. While Pandya’s tweet angered fans, Zaheer responded calmly, reminding the all-rounder of the next delivery he had faced in that match.

Zak’s reply read: “Hahahaha….thank you for the wishes @hardikpandya7 my batting skills can never be as good as yours but the birthday was as good as the next delivery you faced from me in this match”.

Hahahaha….thank you for the wishes @hardikpandya7 my batting skills can never be as good as yours but the birthday was as good as the next delivery you faced from me in this match 😉 https://t.co/anhQdrUBN7

Pandya’s tweet read: “Happy birthday Zak … Hope you smash it out of the park-like I did here @ImZaheer”.

Pandya recently underwent lower back surgery in the United Kingdom (UK) and on Tuesday he shared his journey towards full recovery via a video on Twitter. Hardik had left for the United Kingdom to get his back treated by the same doctor who treated him during India’s tour of England in 2018 and the 2019 World Cup.

WATCH – Hardik Pandya Started Rehabilitation After The Back Surgery

Pandya had aggravated his back injury during the three-match Twenty20 International (T20I) series against South Africa. He was not picked in the India squad for the ongoing three-Test series against the visiting South Africans. He will also be missing the T20I series against Bangladesh which will be played in India, starting November 3. After India’s bittersweet campaign at the grandest stages of them all, Pandya also took a sabbatical from international cricket and was not named in the 15-man squad for the Caribbean tour across the formats.

India will host South Africa for the second Test in Pune from Thursday. The third and final Test will be played in Ranchi from October 19. 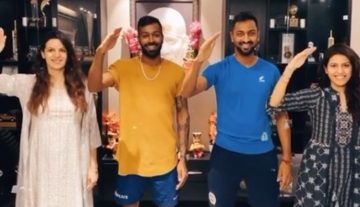