After having a forgettable 2018 with the bat, former Indian skipper MS Dhoni really came into his own right at the start of 2019. Playing in the tough Australian conditions after having spent three months off the field, Dhoni helped his team to clinch the series. Even though he wasn’t looking similar to what he used to be but still he was good enough to prove that he still has got a lot left in him.

In the Australia series, Dhoni amassed 193 runs at the same average in three games. He was successful in getting the team over the line in two matches while poor umpiring led to his downfall in the series opener. Thus, he has rightly adjudged the ‘Man of the Series’ and also became the oldest Indian to win this award. He now has got seven of these honors in his career till date.

Over the last few months, there have been several talks about Dhoni hanging his boots after the World Cup 2019. Many claimed that he was finished after the poor show last year where he failed to hit at least one half-century. But, with the most recent of his performances, he has made a contention for himself to carry on even after the mega-event.

Here is why MS Dhoni should not decide to retire after ICC World Cup 2019:

Arguably MS Dhoni is the most experienced middle-order batsman in the world. He has the experience of facing all sorts of circumstances and there is no one who understands how to take the team over the line in last few overs better than him. With lots of questions still surrounding Dhoni, he can be there until he sees them through this transition and finds someone reliable enough to fill his shoes.

Even though MS’ power-hitting abilities have gone downhill, sometimes just having him at the other end gives great assurance to the other players. It was evident with Dinesh Karthik and Kedar Jadhav firing freely against Australia as an epitome of trust was standing at the opposite end. Dhoni is also capable of easing the heat off them and it could be a huge learning curve for the other batsmen. 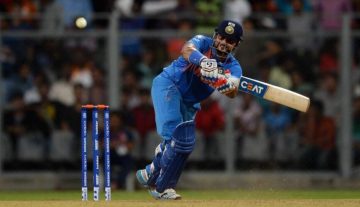 Article
By CricShots - Feb 24, 2018
Suresh Raina Gives The Mantra For Success In The Final T20