The Indian cricket team is currently in England for the much-awaited upcoming five-match Test series against England, and Virat Kohli’s men are looking in terrific shape and high spirits. The veteran Indian opener, Rohit Sharma introduced a “unique” game to the team. His India teammates, including skipper Virat Kohli, were a quick study in terms of getting acclimatized with the game, and they were seen enjoying themselves even as they leaped to take catches.

Posting the video of the same, an Instagram post from the official handle of the Indian cricket team read, “Practice, Laughter. Do not miss as Rohit Sharma’s unique game leaves Team India in splits.”

At the beginning of the video, Rohit explained the game to the entire team. We have two teams, he said, adding that after three rounds, we will see who has more points.

The game goes like this: R Sridhar, the fielding coach of the Indian side, first hits the tennis ball in the air with a racquet. A player from each team needs to take the ball on his head, and the surrounding players try to catch it. Every successful completion gets one point. All the players are lined up alongside Sridhar and it’s only after he hits the ball that these players start running in the direction of the ball.

However, no other team member can hit the ball with the head barring the one wearing the helmet. The team’s job is to catch the headed ball. Once the game started, it was just fun and laughter all around the park as the players enjoyed the new game. Once the cricketers finished playing, the support staff also participated with a small team and had fun.

After the conclusion of the game, Rohit said, “It was a good way to start the day, getting everybody in the mood and we had a bit of fun.” The first Test match between India and England will be played from August 4 at Trent Bridge. 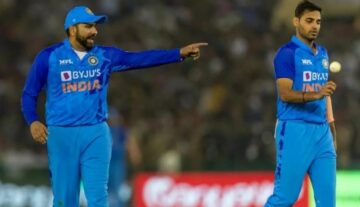