The veteran Australian opener, Aaron Finch might not be able to take part in the upcoming ODI series against West Indies as he seems to have aggravated his right knee injury issue during the fifth and final T20I against the West Indies. On Saturday, he twisted his knee while fielding in the fifth T20I and was forced to leave the field.

While batting in the second innings, Aaron Finch was in visible discomfort, however, he played a brilliant knock of 23-ball 34. If Finch does end up missing the ODI series, then Australia might be forced to find a new skipper for the three ODIs. Veteran wicketkeeper-batsman Matthew Wade was named as designated vice-captain for the T20I series but the Tasmanian isn’t sure whether the title would see him considered as Aaron Finch’s deputy.

Talking about the same, as per the quotes in crikcet.com.au., Matthew Wade said, “It’s a bit of a moving thing, the vice-captaincy. Going forward in the one-dayers I have no idea what will happen there. I came over here thinking I would play the T20s and I wouldn’t play the ODIs. I think some of the younger guys would get some opportunities to play them which is fair enough, I’ve been around a long time now.”

Matthew Wade led Australia in a T20I against India last summer when Aaron Finch missed the game due to injury but the Tasmanian stumper has not played an ODI since September 2017. However, he asserted, that it is too early to write off Aaron Finch and he may well recover in time and lead the Australians in the three-match ODI series.

The ODI series between Australia and the West Indies will kickstart from July 21 in Barbados. 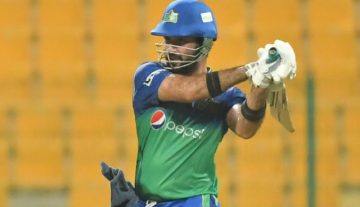 News
By CricShots - Oct 9, 2021
Sohaib Maqsood Ruled Out Of The Pakistan Squad For T20 World Cup