Former Australian gloveman Adam Gilchrist has always been known for his attacking batting display. But, according to him, Muttiah Muralitharan was the toughest bowler for him to play in his cricketing career.

During a talk show named “Breakfast with Champions”, hosted by Gaurav Kapur had asked, “Who was the toughest bowler you faced?” Replying to the name of the bowler he had no clue during his career, Gilchrist said that it would be Sri Lanka’s Muttiah Muralitharan.

Gilly even revealed that it has always been difficult for him to read the deliveries from Muralitharan’s finger movements, adding that the legendary spinner always made him feel like a 12-year-old.

The veteran keeper went on to add that more than the physical fear and facing 150+ kmph bowling speed, he had always afraid of looking stupid while facing a bowler, which Murali used to do with the batsmen.

The former Australian wicketkeeper-batsman got dismissed by Muralitharan four times in six Tests. Even in his autobiography published in 2008, he argued with the ICC for allowing Sri Lankan cricketer Muralitharan to bowl; Gilchrist reckons that ICC changed the throwing law to legitimise a bowling action that he regards as illegal. The law change was described as “a load of horse crap. That’s rubbish.”

Here is his video of the talk show:

The bowler @gilly381 found the toughest. Surpise or no surprise? pic.twitter.com/Hp7gIpA1T6 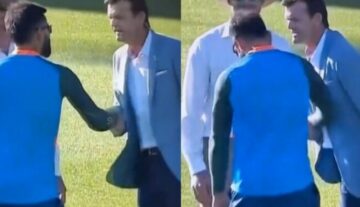