The Australian leg-spinner, Adam Zampa had a chance of taking a hat-trick in the T20 World Cup 2021 in the United Arab Emirates. In the Super 12 match against Bangladesh at the Dubai International Cricket Stadium, he was at his very best, picking up five wickets for a mere 19 runs in his four overs. He also fetched the Player of the Match award as the Aussies registered a dominating 8-wicket win.

The hat-trick would only have been an icing on the cake for the leg-spinner. In the 11th over of the Tigers’ innings, he got rid of Shamim Hossain Patwary and Mahedi Hasan, who got out for a golden duck. In the first ball of the 15th over, Zampa stood on a hat-trick with Taskin Ahmed on strike. The leg-spinner bowled a googly outside the off-stump after which Taskin went for a drive and he only manage a thickish outside-edge.

Matthew Wade, the wicketkeeper, however, failed to catch the ball in time and, Adam Zampa, quite understandably, was disappointed. In the same over, Adam Zampa got rid of lower-order batters Mustafizur Rahman and Shoriful Islam.

In the meantime, Adam Zampa churned out a hilarious post on Instagram, poking fun at Wade for dropping the catch. The leggie uploaded a picture where Wade’s keeping gloves can be seen up for sale for a decent price. He also shared pictures with his teammates after Australia won the World Cup.

Adam Zampa was the pick of the bowlers for Australia during the T20 World Cup 2021 as he scalped 13 scalps at an average of 12.07 and a strike rate of 12.4. His economy rate of 5.81 suggests that the opposition batters were finding it difficult to read him.

Apart from the game against England where he conceded 37 runs, Adam Zampa looked in excellent rhythm with the ball in hand. Even in the final against New Zealand in Dubai, he managed to get the crucial wicket of Martin Guptill and gave away only 26 runs from four overs. In 57 T20Is, Zampa has accounted for 65 wickets with one five-wicket haul. 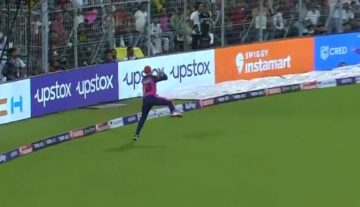 IPL 2020
By CricShots - May 24, 2022
Jos Buttler Grabbed A Brilliant Catch To Send Back Matthew Wade Packing