India’s stand-in skipper, Ajinkya Rahane has a lot of things to look forward to as the Indian team is practicing hard for the upcoming 3rd Test against Australia in Sydney, starting January 7. He will be keen on leading the team from the front as India have a good opportunity to take an unassailable 2-1 lead in the ongoing 4-match series.

It was Ajinkya Rahane who led the visiting team wonderfully well in Melbourne as India recovered from a crushing defeat in Adelaide to bounce back and defeats the hosts by 8 wickets in the 2nd Test. India missed the services of Virat Kohli but Rahane stepped up and scored a match-winning century.

The Indian team also lacked the services of Mohammed Shami and Ishant Sharma but the bowling clicked as a unit to dismiss Australia for 195 and 200. Ajinkya Rahane will now be eyeing a few milestones in Sydney Test. The Mumbai batsman can become only the second India Test skipper to win his first 4 Tests as skipper. MS Dhoni achieved the feat after taking over from Anil Kumble in 2008.

Also,  Rahane is well on the verge of becoming only the fifth Indian batsman to score 1000 or more runs in Australia. He currently has 797 runs from 10 matches. Sachin Tendulkar is on top of the list with 1809 runs and Virat Kohli behind him with 1352 runs in 13 matches. Virat though will take no further part in the ongoing series as he has headed back home on paternity leave.

ALSO READ: Will Pucovski Cleared oF All The Concussion Tests Ahead Of Sydney Test

Most Test runs by Indian batsmen against Australia in Australia: 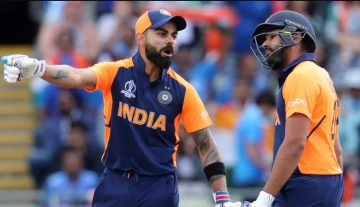 Stats Shots
By CricShots - Aug 3, 2022
Rohit Sharma Goes Past Virat Kohli In Terms Of Hitting Sixes As Skipper In T20Is