The buzz around the ICC Cricket World Cup 2019 is rising with every passing day. Several cricket experts and former cricketers have picked their favorite teams to lift the cup. England and India are everyone’s favorite to lift the Cup on July 14 at Lord’s and Indian batsman Ajinkya Rahane is no exception with his views. He backs Team India to win their third World Cup in England and Wales.

Rahane himself featured in the World Cup 2015 in Australia and New Zealand but his chances to feature in his second WC are quite slim. He last played a One-Day International for India against South Africa in February 2018. Meanwhile, he picked India as the favorites to win the WC while England and New Zealand are also in contention.

“I think personally we (India) have a very strong side. The cricket which we are playing recently is magnificent. The challenge in the World Cup will be to gather that momentum early and continue that. But I feel in ICC tournaments, it is important to give your best in each and every game,” he said.

Surprisingly, Rahane named West Indies to do wonders at the World Cup and described them as unpredictable.

“Apart from India, New Zealand is a very good ODI side and do well in ICC tournaments. West Indies is unpredictable but dangerous team and also England. Playing England in England is going to be challenging,” he added.

Despite being the favorites to win the Cup, both India and England didn’t have a great time playing in the ODI format recently. Both teams couldn’t win their respective ODI series and were thrashed by their opponents. While India lost the series against Australia by 3-2, England drew the series with a scoreline of 2-2 against West Indies.

The much-awaited World Cup will begin from May 30 with the opening match is scheduled between England and South Africa. India will start their campaign a bit late in comparison to other teams. Their tournament opener will be against South Africa on June 5 in Southampton. 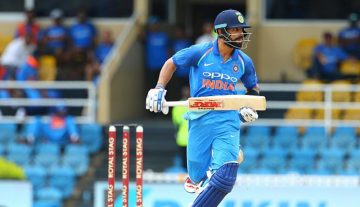 Article
By CricShots - Aug 22, 2017
Virat Kohli On The Verge Of Surpassing Another ODI Record