The veteran Indian batsman, Ajinkya Rahane has expressed that he is still hoping that the national selectors recognize the efforts that he is making while deciding the World Cup squad. He played his last limited-overs game for India against South Africa last year in January and even recently, he was ignored for the limited-overs series against Australia, which up to some extent defines that Rahane’s chances for World Cup have been declined further.

Currently, Ajinkya is leading Mumbai n the ongoing Syed Mushtaq Ali T20 Tournament, talking to the reporters during the tournament, he said, “As a batsman, I am aggressive but by nature, I am quite shy. I prefer to let my bat speak but sometimes it’s important to speak the truth. I have always believed the team comes first and respected the management and the selectors’ decision. I will continue to do that. But in the end, it is important that your performance is recognized.”

Rahane also made a complaint that he hasn’t given sufficient chances to prove his worth in limited-overs cricket. He said that the point is that if as a player he has always played for the country and that is one of the crucial reasons that he deserves consistent chances. That’s the least I am asking.

In 2017, the batsman was given the player-of-the-series award in West Indies, and in the same year, he scored four consecutive half-centuries against Australia, while opening the innings for India. In 2018, against the Proteas, he was asked to bat down the batting order with Rohit Sharma, Shikhar Dhawan, and Virat Kohli taking the top-three positions.

Rahane further elaborated, “I also believe that my performances were really good. If you see the last three-four series, my average was around 45 to 50. After I was dropped, I went back to domestic cricket and feel I have done reasonably well. I did well as an opener against West Indies and Australia but in South Africa, the management thought I would be suitable at No. 4. I said ‘whatever you prefer’ because the team wanted it. But every individual needs confidence and positive vibes like ‘yes, you are there and you are doing it for the team’.”

With chief selector MSK Prasad recently mentioning that Rahane could still be a part of India’s World Cup plans, the batsman is hopeful of making it into the squad for the big tournament.

Talking about the same, Ajinkya said, “It feels good that I am being considered. But at the same time, you need to get a chance. Playing the World Cup is a dream every cricketer cherishes. I do respect the selectors and team management’s performances and I think I deserve a chance. I am very much hopeful.” 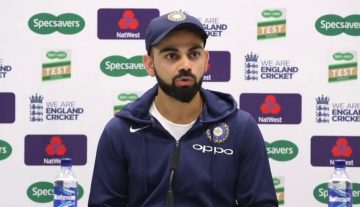