The chief of Indian selectors MSK Prasad has finally revealed that along with Rishabh Pant, Vijay Shankar and Ajinkya Rahane are also in contention for a place in the 2019 ICC World Cup squad. The deadline to announce the 15-member squad for the World Cup in England and Wales is April 23.

Pant, who is touted to be the successor of MS Dhoni behind stumps once the legendary wicketkeeper-batsman retires, has already impressed one and all with his skills in Test cricket. In a handful of Test matches that he has played, Rishabh has amassed a couple of centuries and also created a record by an Indian wicketkeeper in Australia. More importantly, both his hundreds have come in overseas conditions — England and Australia.

Vijay Shankar, though, is yet to impress with his bowling but has performed reasonably well with the bat. Recently, he was asked to bat up the order at No.3 in a couple of matches in the T20I series in New Zealand and he proved his worth with the bat.

During India’s four-run defeat in the series decider vs New Zealand on Sunday, Shankar hit a 28-ball 43 and also showcased his big-hitting prowess.

As per the quotes in ESPNCricinfo, Prasad said, “In whatever opportunities he has got, Vijay Shankar has shown the skillsets required at this level. We have been grooming him through India A tours in the last two years. But we will have to see where he can fit in the dynamics of this team.”

Prasad further hinted that Ajinkya Rahane, who last played for India in an ODI in South Africa in February last year, could be India’s third opener at the World Cup. He has been in decent form in List A cricket, scoring 597 runs in 11 innings at an average of 74.62. He has also hit two centuries and three half-centuries.

ALSO READ: Ajinkya Rahane Will Lead India A Side

Talking about the same, MSK said, “In domestic cricket, he [Rahane] has been in form. He is very much in contention for the World Cup. Undoubtedly he [Pant] is in contention. A healthy headache. The progression of Rishabh in the last one year is phenomenal across the formats. What we actually felt is he needs a bit of maturity now, gain more experience. That is the reason we have included him in India A series wherever possible.”

India will be commencing their World Cup campaign against South Africa at The Rose Bowl in Southampton on June 5. 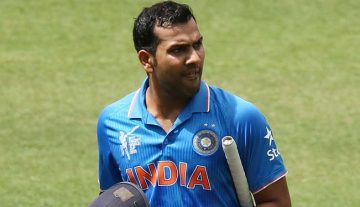 Article
By CricShots - Dec 22, 2017
Rohit Sharma Will Be looking To Improve His T20 Numbers