The veteran Indian batter, Ajinkya Rahane has pulled off a phenomenal double century while plying his trade for Mumbai in their Ranji Trophy 2022-23 contest against Hyderabad at the MCA Cricket Ground in Mumbai on Wednesday. Put into bat by Hyderabad, Maharashtra scored 597 runs in 115 overs, owing to the double ton from Rahane combined with Sarfaraz Khan’s 106 runs and Yashasvi Jaiswal’s 162 runs.

The Maharashtra skipper played an impressive knock of 204 runs from 261 deliveries with the help of 26 boundaries and three maximums during his time at the crease. He looked well-composed before hitting the ground running and carving out the brilliant knock.

Here is the video of Ajinkya Rahane reaching his double hundred:

However, Ajinkya Rahane was then dismissed with a rather terrific delivery by Tanay Thyagarajan as he cleaned him up in the 111th over of Mumbai’s innings. He was also looking to stake his claim back into the Indian Test team after losing his spot post-India’s tour of South Africa earlier this year. Rahane has amassed 4931 runs at an average of 38.52 with 12 centuries and 25 half-centuries in his 82 Tests thus far.

Mumbai has been marvelous in their innings and has not shown any signs of complacency with batters in complete control of the contest. Sarfaraz Khan, who is still on the crease with a century under his belt, will look to continue piling up the vital runs on the board for the side.

On the other hand, Hyderabad will need to shift gears and look for crucial breakthroughs before they head for their batting innings. Mehrotra Shashank of the bowling side added a couple of wickets in the first innings and has proven to be economical for his team thus far.

The Tanmay Agarwal-led side will aim to replicate the batting innings of Mumbai with the openers and middle-order batters on the lookout for big scores in the contest. 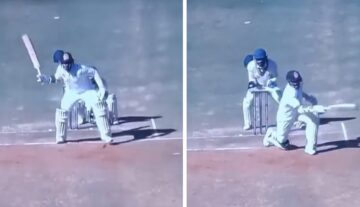 News
By CricShots - Feb 2, 2023
Hanuma Vihari Aces A Reverse Sweep While Batting With A Broken Hand