Alex Hales has followed England team-mate Adil Rashid in turning his back on first-class cricket after signing a new white-ball contract with Nottinghamshire through to the end of the 2019 season. 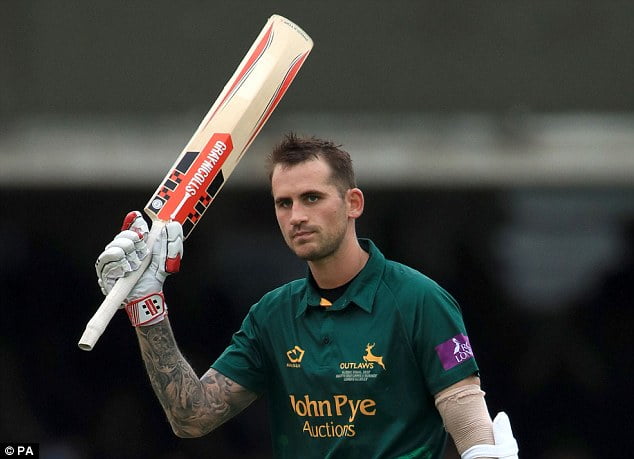 Rashid caused a stir last week when he announced his intention to focus solely on the limited-overs formats for Yorkshire this season and Hales has gone one step further, penning a two-year deal that will see him feature only in the Royal London One-Day Cup and Vitality Blast.

The opening batsman proved crucial in Nottinghamshire’s domestic white-ball double in 2017 and is a regular in England’s limited-overs set-up with 58 one-day and 52 Twenty20 international appearances.

But the 29-year-old’s decision seemingly ends his hopes of adding to his 11 Test caps, the last of which was earned in August 2016.

He said in a statement on his official Twitter account: “For the next 18 months I’m excited to focus entirely on limited overs cricket and want to be part of a Notts team that retains the white ball double and a World Cup winning squad with England.”

“The decision to focus on my white ball game wasn’t taken lightly or on the spur of the moment, it’s one I’ve thought long and hard about. It’s also one I’ve discussed at length with the Notts management.”

Hales, who has registered 13 centuries in 107 first-class appearances, is slated to feature in the upcoming Pakistan Super League with Islamabad United following England’s ODI series in New Zealand, but both he and Rashid were overlooked in the Indian Premier League auction.

Former England captain Michael Vaughan was among those to criticise Rashid’s decision and Hales following suit is likely to strengthen fears that England’s top limited-overs internationals could abandon red-ball cricket in favour of playing in lucrative domestic T20 competitions around the world.

Hales has the substantial pedigree in the sprint format, having registered England’s only T20 international century while he was ranked the world’s leading batsman in the International Cricket Council rankings at one time.

He amassed 507 runs at an incredible strike-rate of 204.43 in last year’s T20 Blast while he averaged 72.33 in the One-Day Cup and capped his campaign with a stunning 187 not out against Surrey – the highest individual score in a Lord’s final.