Australia is currently in Bangladesh for a 5-match T20I series. However, the visitors have been in terrible form in the shortest format of the game. Earlier, they suffered a 1-4 loss in the T20Is series against the West Indies in the Caribbean islands. Even in Bangladesh, the hosts won the first game. Earlier, they faced the Aussies had never lost a game in the shortest format against the Tigers. However, this time around, they were clinical in every aspect of the game.

Rightly so, they deserved a 23-run victory over Australia. With this victory, the hosts have taken a 1-0 lead in the five-match T20I series. Bangladesh players made use of their conditions to good effect. Australia’s fast bowler Andrew Tye totally felt uncomfortable on the field during the first T20I against Bangladesh. Just before bowling the last ball of his full quota of 4 overs, he was seen vomiting on the field.

The incident took place during the 18.5 over when Andrew Tye vomited on the field. After bowling five deliveries, all of a sudden, he was seen vomiting.

Batting first, Bangladesh managed only managed to reach a below-par score of 131/7 in their allotted quota of 20 overs. Shakib Al Hasan was the highest run-getter with a tally of 36 off 33 balls with the help of 3 fours. Mohammad Naim scored a vital 30 off 29 balls at the top.

Naim struck 2 fours and as many sixes. Afif Hossain and Mahmudullah registered scores of 23 and 20 runs respectively. On the other hand, Josh Hazlewood was the pick of the bowlers for the visitors as he scalped three dismissals.

Mitchell Starc took a couple of wickets as well while Adam Zampa and Andrew Tye took a wicket apiece. Australia eventually got bundled out for a meager score of 108. Mitchell Marsh top-scored with 45 off 45 balls (4 fours, 1 six). Nasum Ahmed took 4 wickets. Mustafizur Rahman and Shoriful Islam took 2 wickets each. 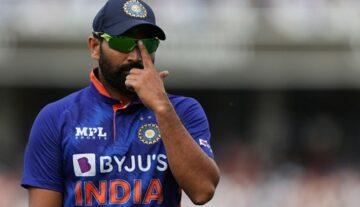