The Indian skipper, Virat Kohli took to Instagram to react to his wife Anushka Sharma’s latest Instagram picture. Anushka on Saturday posted a picture of herself, soaking in the sun. Captioning the picture on Instagram, Anushka wrote: “I told you I knew all the sunlight spots”.

Soon after the Bollywood actress shared the picture, Virat left a heart emoji along with a heart-eyed emoji in the comments section. Both Virat and Anushka have been quite active on social media, urging their fans to stay indoors and follow the government guidelines during the coronavirus-enforced lockdown.

Kohli and Anushka often pop up on each other’s social media, whether in their interactions with others or their own posts. While Kohli’s “dinosaur walk”, in a video shared by Anushka Sharma, led to a meme-fest.

Recently, Virat went live on Instagram with the premier Indian off-spinner Ravichandran Ashwin and during the chat, the India skipper applauded Anushka’s fearless approach towards her work.

Talking to Ashwin, Virat said, “She is absolutely fearless, so when she does that she believes in that project. It is something that I’ve also learned about looking at her. To have that belief that you are doing the right thing, then whatever happens left, right, or centre you are not bothered by it.”

ALSO READ: Rohit Reveals The Reason Of His Wife Crying On His Third Double Ton

Virat was slated to lead the Royal Challengers Bangalore (RCB) in the 13th edition of the Indian Premier League (IPL) but the Board of Control for Cricket in India (BCCI) postponed the cash-rich league due to the ongoing coronavirus pandemic. Some of the reports have suggested that the tournament will take place later this year. 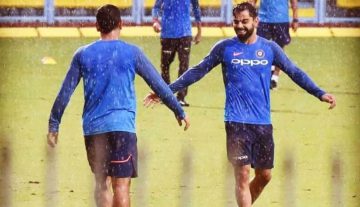