The veteran Indian opener, Rohit Sharma, recently was seen having a conversation with his teammates Shikhar Dhawan and Mayank Agarwal in a show ”Open nets with Mayank” on BCCI.tv. During the interview, both Rohit and Shikhar went on to recall their best moments so far in Indian cricket and opened up about their camaraderie on and off the field.

Recalling his third double century in One-Day Internationals (ODIs), Rohit went on to reveal the reason why his wife Ritika Sajdeh cried in the stands in Mohali as the right-handed batsman created history by becoming the only player to register three or more 200-plus scores in the 50-over format.

Talking to Mayankar, Sharma elaborated, “I just asked her why did she cry? She told me she thought before that, I think it was my 196th run where I had to dive, so she thought I had twisted my hand. That was a really worrying factor for her and she got really emotional because of that, I guess.”

The veteran Indian opener further mentioned that the knock was special because it came on the day of his wedding anniversary. Rohit has three double centuries under his belt in ODIs, two of them came against Sri Lanka while the other one came against Australia in 2013.

Rohit also holds the record for the highest individual score in the ODIs. He had smashed 264 runs against Sri Lanka in Kolkata in 2014. 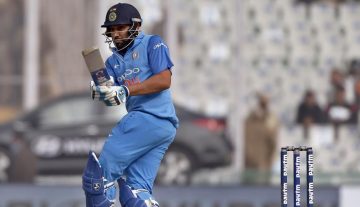