Former India speedster Ashish Nehra said that it’s high time for Kuldeep Yadav as he needs to come out of MS Dhoni’s shadow while taking Decision Review System (DRS) calls. Nehra, however, said that the spinner needs to judge lbws better and learn to take it by convincing his captain without depending on the wicket-keeper as well.

However, his comments came into the limelight after Kuldeep Yadav returned to the T20I during the second match against Sri Lanka. The youngster did well from his first over and had even caught opposition captain Dasun Shanaka trapped in front of the wickets on the second ball. However, the umpire didn’t give him out.

Moreover, Kuldeep Yadav managed to convince the skipper Shikhar Dhawan for the review, but wicket-keeper Sanju Samson thought the ball didn’t hit the stumps. And, Ashish Nehra said that they should take that call as they had both their reviews left and were defending a small total as well.

Ashish Nehra said to Cricbuzz: “See, the bowler was playing after a long time, the captain was new and even the wicketkeeper was new; that’s one way of thinking about this. The second point of view is that you have to learn this: you had two reviews and Shanaka, Hasaranga, these guys are the experienced ones who have played the most for Sri Lanka in the last few months, so you should have gone for it. Even if you weren’t 100% sure and lose the review, still it’s not a big deal. These are the things that they should keep in mind.” 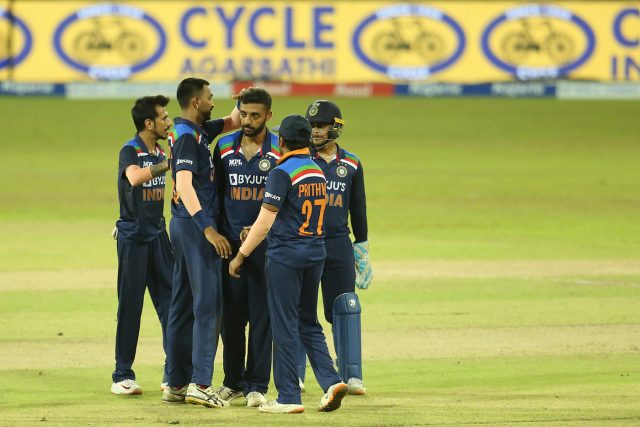 He continued: “And Kuldeep Yadav should also learn this. MS Dhoni isn’t there anymore to help you out, it’s Sanju Samson. So as a bowler you should put even more pressure on the captain saying, ‘Gabbar (Shikhar Dhawan’s pet name) bhai lelo, 2 review hai humare paas (Please take the review, we have two of them)!'”

However, the DRS blunder didn’t bother much as Kuldeep Yadav dismissed him in the very next over as Sanju Samson stumped him off a wide ball. And, the veteran spinner returned with the bowling figures of – 4-0-30-2 as well.

Videos
By CricShots - Jul 5, 2022
Sanju Samson Helps Out Groundstaff During The Rain Break