Nowadays, fitness has plays a crucial role in a cricketer’s career. In cricket, the fitness has always been a concern for the Australians for the longest time,  but now it has become a common thread for most of the competing nations.

India skipper Virat Kohli is arguably the fittest cricketer in the world. However, despite this Kohli-inspired fitness fascination, Australians are still the leaders when it comes to fitness and using new techniques to further their training.

On Thursday, as the humidity drained the Australians in the second ODI at the Eden Gardens, many in the team also seen wearing  GPS tracking vests under their uniforms.

After Australian paceman Kane Richardson delivered the fifth ball of the 12th over in the India innings, the camera panned to capture the back of his jersey. While, Michael Clarke, on commentary, helpfully explained that it was a GPS tracker device which the Australian strength and conditioning coach would monitor to track the players’ fitness.

GPS tracking helps the coach to monitor the players’ heart rate and count the distance a player covers during a match in terms of steps taken. Especially, in hot conditions like Kolkata, the management directed a few of its players to wear the GPS devices.

It was back in 2006-’07 that the GPS was first used on the cricket field by Australian players. The study was allowed to find out how much players exerted during a match and used to evaluate the strength levels of a player.

While India’s team management uses some unique techniques in order to monitor the exertion levels of the cricketers, it has yet to take the next step to gauge the endurance levels of players during a match. Taking a few lessons from the Australian team management, they could go a long way to help them achieve that goal. 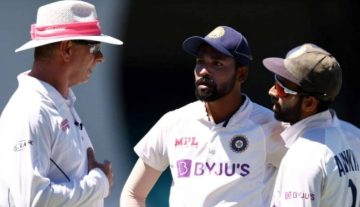