The second match of the three-match T20I series between Australia and India is scheduled to be played at the Sydney Cricket Ground in Sydney. After two losses in the ODI series, India has been looking pretty confident as they managed to win the next two games of the tour. Although the two matches they won were played at Canberra and Sydney hasn’t proved to be their happy hunting venue, they would like to change that in the next couple of matches.

With momentum on their side, the men in blue have a great chance to seal the T20I series and extend their unbeaten run in the shortest format of the game. They haven’t lost any T20I in their last 10 games. On the other hand, Australia was well on the verge of sealing the first T20I but Ravindra Jadeja had other plans. He took his side to a respectable score with a fighting 44 not out.

The veteran southpaw was later replaced by Yuzvendra Chahal as a concussion substitute and the Australians looked clueless while facing the leg-spin grandmaster. They will have to regroup and display a better performance if they have to stay alive in the T20I series.

Shreyas Iyer, Shikhar Dhawan, Virat Kohli, Aaron Finch, and Steve Smith have always been the prime contenders for fantasy cricket. Even, D’Arcy Short also is added in fantasy cricket and that will depend on the balance of the squad. Apart from them, there are some useful batsmen in the line-ups as well, like Mayank Agarwal, and Manish Pandey.

There are some really reliable all-rounders in both the teams but citing the pitch in Sydney, Washington Sundar, Hardik Pandya, and Glenn Maxwell seems to be the perfect fit. Apart from them, the good all-rounder for IPL fantasy cricket is Moises Henriques.

Both the teams don’t have decent bowling line-ups but they don’t have practiced a lot. Bowlers like  Adam Zampa, Mitchell Starc, Deepak Chahar, and Mohammed Shami become the obvious choices for the IPL Fantasy XI on the sticky track of Sydney. Apart from them, some crucial bowlers can be like, Navdeep Saini, Josh Hazlewood, and Sean Abbott. 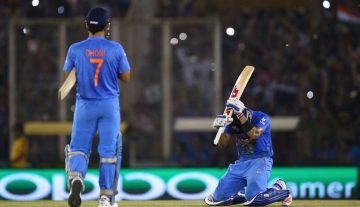 News
By CricShots - Sep 12, 2019
Virat Kohli Remembers The Day When MS Dhoni Made Him Run Like A Fitness Test