It has been five years since the death of former Australia opener Phil Hughes, but his friends and the cricketing fraternity haven’t forgotten the horrifying accident. Michael Clarke, Steve Smith, and David Warner were among those who shared emotional tributes for Phil Hughes.

Hughes, who played 26 Tests for Australia, was 25 years old when he died from bleeding on the brain on November 27, 2014, after being hit on the base of the skull by a ball during a domestic Sheffield Shield match in Sydney.

Talking to Instagram, Clarke wrote: “Everyday I think of you, but this week even more. I wish you were here buddy.” He also had delivered a touching eulogy for his “little brother” after his death.

Everyday I think of you, but this week even more. Wish you were here buddy

Steve Smith shared a photo with Hughes on Instagram with the caption “Miss you bro #408”. 408 signified Hughes’ Test cap number.

Hughes’ death in 2014 left the cricketing world in utter shock. It even led to safer helmets to prevent further mishaps.

In a statement released on Tuesday, Cricket Australia chief Ken Roberts said, “Phillip Hughes was the very best of Australian cricket: a man dedicated to his family, a loyal friend, a popular teammate and a prodigiously talented cricketer. There hasn’t been a single day over these last five years when Phillip’s loss hasn’t been felt acutely by the Australian cricket family.”

Clarke, Smith, and Warner all went on to score centuries in Australia’s first match after his death, when they hosted India in the opening Test of the series in Adelaide in December 2014. Smith went over to the 408 design on the outfield that honoured Hughes when he reached his century as a tribute. 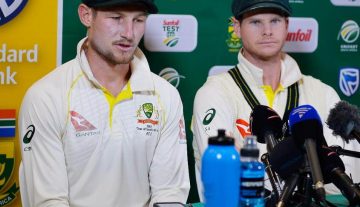