Chennai Super Kings (CSK) skipper, MS Dhoni has reported having told the management that he can go back to auction pool before the 2021 edition of the Indian Premier League(IPL). Dhoni, who led the team to three IPL titles, is reportedly open to the prospect of going back into the auction pool so that CSK can buy him for a lower price.

As per the quotes in Times of India, one of their sources in CSK said, “There will be a big auction before the 2021 IPL and Dhoni has told us that he will play the tournament. So, there’s no question of his retirement from the T20 version anytime soon. He said he can go back to the auction pool. That will give CSK the option of using the right-to-match card to pick him, maybe for a lower price. “We know what Dhoni means to us. We don’t want him to go back to the auction pool.”

Dhoni’s future with the Indian team has created a lot of buzz in recent times but it seems that he had no plans to take a final call on his career in the near future. Dhoni has been on a sabbatical since India’s semifinal exit from the ODI World Cup in England in July. He has missed the tour of the West Indies and the home series against South Africa and Bangladesh.

Earlier, reports surfaced that Dhoni will take a call on his international future after next year’s IPL.

Talking about the same, one of the sources of PTI had said, “If at all MS will take a call on his future, it will only be after the IPL. You can’t stop speculation as he is such a big player. He is in the best shape possible fitness-wise and has been training hard for the last one month.”

It furtehr added, “However the number of competitive games he will play before the IPL will be decided in due course.” 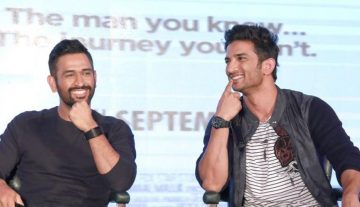 News
By CricShots - Jul 5, 2018
MS Dhoni’s Biopic To Get A Sequel, Sushant Singh Rajput Roped In